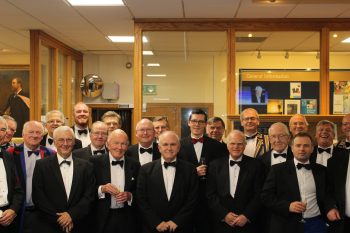 Old Whitgiftians enjoyed a masterful rendition of Bach’s ‘Chaconne’ for Solo Violin by Dan-Iuliun Drutec OW (2013-‘15) in the Old Library at the School on 26th October. Dan had been winner of the School’s International Music Competition in 2013 and left the school two years ago to study at the Guildhall School of Music. Since then he has performed the complete cycle of all ten Beethoven Violin Sonatas and has appeared frequently in concerts and festivals in Moldova, Romania and Bulgaria. This summer he played as a leader of second violins at the internationally-renowned festival for youth orchestras, the “Young Euro Classic”, held in the Konzerthaus in Berlin.

The occasion was the 2017 Vice Presidents’ Dinner hosted by WA President, Richard Bateman OW (1967-74) and attended by nearly thirty OWs including Past Presidents and Vice Presidents together with members of the WA Main Committee. The new Headmaster, Mr Christopher Ramsey, approaching the end of his first term at the School, was Guest of Honour.

Following drinks in the Raeburn Library, the party made its way to the nostalgic surroundings of the Old Library where the school chefs excelled themselves once again by serving a first-class four-course dinner.

Following Dan’s performance, the President welcomed everyone to the occasion – especially Mr Ramsey who was attending his first WA event – and proposed a toast to the School. He then introduced WA Chairman, Jonathan Bunn OW (1980-88), who gave an up-date on WA matters whilst welcoming Mr Ramsey and assuring him that the WA would offer him every possible assistance in the future – particularly in the area of fundraising which OWs were now beginning to accept as a priority. He concluded with a toast to the President, Past Presidents and Vice- Presidents.

The Headmaster responded by re-assuring those present that he fully intended to retain everything that is good about the School and that the “birds were safe”. He went on to say how impressed he had been with both pupils and staff, who he described as being conscientious, enthusiastic and determined to give of their best. Referring to the Chairman’s remarks, he said was also looking forward to a closer, rewarding and more productive relationship with the WA, whose potential value to the School he fully appreciated and was keen to maximise.

The evening concluded with a rousing performance of ‘Carmen’ sung by all those present (with the possible exception of the Headmaster!)