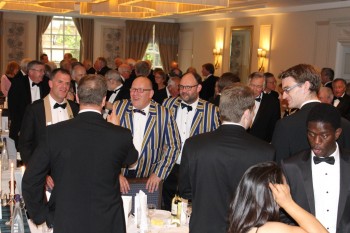 This year’s Whitgiftian Association 120th Annual Dinner, held at the Caledonian Club on Friday 12th June, was a resounding success with nearly 100 OWs, together with some warmly welcomed wives and daughters in attendance.

Pre-dinner drinks were served in the beautiful Morrison Room, before we were treated to an exceptional Scottish-themed dinner of Cock-a-Leekie Soup, Guinea Fowl and a trio of Scottish desserts, not to be pronounced by the faint-hearted: Drambuie syllabub, cranachan ice cream and ecclesfechan butter tart!

After dinner, we were privileged to be entertained by a remarkable young Whitgiftian: International Music Competition (IMC) Winner, Dan-Iulian Druţac(Whitgift, 2013-2015). Dan-Iulian played at a standard worthy of any professional and his impressive rendition of Paganini’s Variations on the violin was rewarded by a standing ovation. Dan takes up a Full Scholarship to the Guildhall School of Music in September.

President, Sir Keith Lindblom (1966-74), Chairman for the event, presided over the after-dinner proceedings with wit and aplomb. Opening the speeches, he spoke of his unpromising start in Lower 1B and the profound effect of the Whitgift Masters, in particular long-serving staff member Dai Lewis (RIP).  He also referred to the similarity between two adjacent photos of distinguished OWs on display outside the Raeburn Library. (Can you spot it? Look out for Marland Yarde (2008-2010) and Sir Keith Lindblom.)

Whitgift’s Headboy, (2014-15), Stefan Amokwandoh, responded to Sir Keith’s speech with an authentic and heart-warming thanks to the School and its community. Stefan shortly takes up a place at Princeton to study Chemistry and Pre-medicine. As an aside, he also gained 10 A*s at GCSE, 5 A*s at AS Level, is the 2nd best Under 20 triple-jumper in the UK, finished his Under 17 athletics season as Number 1 in the UK for triple jump – as well as captaining the England Schools International Athletics team and playing in Whitgift’s 1st XI football and 1st V basketball teams.

Guest Speaker, Rupert Warren QC, OW (1981-88), who had first met Sir Keith at a Careers Conversazione at the School when he was just 16, followed Stefan with entertaining reflections on his days at the school, including terrible haircuts, ex-Headmaster David Raeburn’s ‘supportive’ nicknames and Doc Seldon’s secrets to exam success… letting students in on the secrets of exactly how to pass them.

Whitgift’s Headmaster of 25 years, Dr Christopher Barnett, who recently announced that he will retire at the end of the 2016 academic year, responded by bringing the audience to laughter with tales of inter-School rivalry and made many OWs wish they were attending Whitgift in 2015 with the stunning array of opportunities now on offer at the School.

The formal part of the evening concluded with an astounding rendition of Carmen (the best, in the writer’s opinion, ever heard!), after which the company moved downstairs to the Caledonian Club’s Old Library to sample their unrivalled range of malt whiskies. According to the ever-present and watchful eye of Facebook, some OWs didn’t leave until gone 2am.

A fantastic evening. Thanks to everyone who made it so.