A full house of 118 joined President Stuart Woodrow for our 118th Annual Dinner at the glorious setting of The Army & Navy Club in London’s Pall Mall, otherwise known as ‘The RAG’ on 24 May.   A memorable evening was enjoyed by all for this our first dinner under the new guise of the Whitgiftian Association and it was very encouraging that a significant number of younger OWs (aged under 30) were present.

Distinguished guests included Ian Harley and Martin Corney, respectively Chairman and Chief Executive of the Whitgift Foundation, numerous School and Foundation governors, together with the School Captain Jonathan McMillan and his vice captain Fritz Kirchner. The speeches were all excellent with Captain John Jacobsen (Royal Navy) and a former Chairman of the RAG proposing Floreat Domus, with a response from the Headmaster who was in inimitable form regarding the latest developments in the ever changing world of the School. Our guest of honour was General Sir Peter Wall who proposed the WA whilst entertaining his audience with tales of his schooldays and his distinguished career. Peter particularly enjoyed the reunion that night with his old friends from the school water polo team! The President responded in amusing fashion and compared the School when he left in 1975 to the Whitgift of today.Attendees also heard Alan Cowing launch the Gerry Bowthorpe Memorial Appeal and Peter Cox launch his latest book Memories of Whitgift before either heading to the Ian Jacob bar for a nightcap or the coach back to Croham Road! 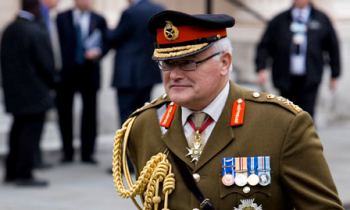