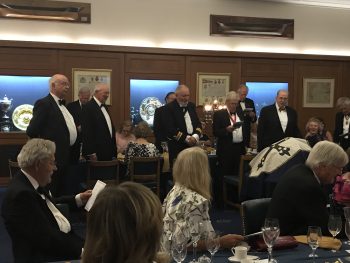 Despite the closure of London’s bridges and streets, not to mention demonstrations and protests against Donald Trump, forty-two OWs and guests managed to gather onboard HQS Wellington moored on the Thames Embankment to enjoy the second OW Liverymen’s Dinner.

With pre-dinner drinks and canapes served on the quarter deck in delightful weather and with magnificent views across the river, dinner was served below decks in the Master Mariners’ Court Room.

The evening was hosted by the senior OW Liveryman Patrick Marsland-Roberts (1953-60), current Master of the Worshipful Company of Carmen. He was ably supported by other OW Liverymen including: Barry Woodman(1956-64), past Master Mason, Simon Fleet (1950-57), past Master Farrier and Dr Peter Warren (1947-56), past Master Educator. Other Liverymen – and women – included current Masters Dr Elizabeth Goodwin, Educators, wife of David Goodwin OW (1955-62) and Ian Spring, Master of the Bowyers.

The Whitgift Foundation was represented by its Chairman, Christopher Houlding accompanied by his wife Caroline and Chief Executive, Martin Corney with his wife Judy.

Amongst other guests were members of the Croydon Dining Club, many with strong family connections to Whitgift and, keeping everybody above board and shipshape was OW, Lt Cdr Noel Atkins (1954-62), attending in full naval regalia.

Following the customary Livery toasts, the host formally welcomed everybody and followed with a brief outline of the evening ahead as well as a plea for those present to help identify other OW Liverymen whose details are currently unknown. He went on to toast the health of the guests. Responding, multi-Liveryman Nigel Israel gave a most interesting talk, full of information about the history of the City of London Livery Companies.

As with all OW gatherings this highly convivial summer’s evening was rounded off by a fulsome rendition of the School song ‘Carmen’, coincidentally, on this occasion also the name of our host’s Livery Company!