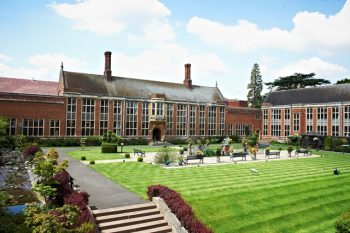 A busy, busy time with firstly a visit to the School concert hall to hear our very own Law Lord give an academic enrichment talk to the boys on the English legal system interspersed with his own personal anecdotes. Then into a decorated Big School to support the School rugby tour ball to wish the boys well in New Zealand and alert our Auckland members of their impending arrival. Next a brief visit to the Clubhouse lounge bar to ensure that the 57 School first form parents on ‘disco layover duty’ were comfortably cared for.

At the OWGS AGM in the School founder’s room their new captain was appointed (of solid OW golfing pedigree) and their busy season mapped out before holding the annual dinner in the School old library, next a brief visit to the clubhouse Bowthorpe Room to meet the members of the OW Corps of Drums and listen to a selection of their repertoire.

A visit to the School PAC to enjoy this year’s Sixth Form plays before calling into a crowded clubhouse to congratulate the School 1stXV and coaching staff on their national cup win 32-22 against Warwick at Twickenham. It has been a pleasure to watch the boys playing first class rugby in the national cup games with a very narrow loss in the U15XV semi-final and two fine wins for the 1stXV in the semi-final and final.

Founders Day, with firstly the annual alumni service in the chapel at Whitgift house followed by breakfast in the staff dining room then the main Foundation service at the Minster with pupils and staff first held in 1889 and an opportunity to continue the tradition of laying the Whyte Gifte buttonhole flower on the tomb of John Whitgift.

Then the fully attended funeral service of a much respected former master and rugby coach and the chance to explain to the bemused vicar that ‘Tigers letter, others number’ hence the J on the flyhalf shirt. Lastly up to the clubhouse to host a convivial inaugural past presidents’ lunch.

An ex officio visit to a WBS committee meeting to find the Society in safe hands and running smoothly and a visit to the refurbished School fives courts to support the OWVC in their match against the School where they were well beaten, followed by a main committee meeting for matters of state.

The OWRFC past players lunch was followed by the 1stXV last league game of the season, a win against Teddington, and the next day to enjoy the opening concert of this year’s WIMC and an opportunity to chat with the visiting Maldovian ambassador.

Then down to the RCP at Deal to support the Halford Hewitt golf team in their first round win over Shrewsbury and the following day to Sanderstead to attend the lovely memorial service of a past president in his crowded church.

A quick check on the overnight survivors of the OWRFC end of season dinner before supporting the OWAFC in their 21st season anniversary football match and a social visit on a very senior member who is not quite so nimble as he used to be, was followed by the AGM of the OWTL in the clubhouse Marlar room.

Lastly words of encouragement to members acting as ‘the enemy’ in the School’s CCF AGI ‘attack’ overseen by our very own Brigadier.

All the while working hard on the forthcoming Annual Dinner, with places still available-book now!