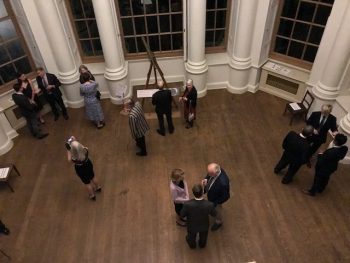 The WA Oxford Dinner 2017 was held at Green Templeton College in the stunning eighteenth century Radcliffe Observatory. The dinner, in aid of the Whitgiftian Association Bursary Appeal, was hosted by Professor Paul Wordsworth OW (1965-70), a Fellow of the College.

The Observatory, designed by James Wyatt, has a distinctive tower based on the Tower of the Winds in Athens. Approaching the College, one can view Atlas and Hercules supporting a globe atop the tower. The College certainly looked beautiful as the Autumn sun faded behind the tower. Guests approached the Observatory through gardens and a cobbled courtyard before ascending to the base of the tower for drinks in the common room of the College.

Professor Wordsworth led guests to the octagonal observatory room, which is usually closed to the public. This is a remarkable space where those with a head for heights chose to climb the spiral staircase to the balcony at the very top.

Dinner was served in the semi-circular space at the base of the Tower. The room looked stunning at night, lit by candles. Guests were joined by current WA President Richard Bateman OW (1967-1974) and WA Chairman Jonathan Bunn OW (1980-88) and his wife Kate.

We had two authors in our midst, Malcolm Parlett OW (1952-59) and Martin Hoyle (1950-59), both of whom kindly donated their books to the School, for the benefit of the WA Bursary Appeal.

After dinner, Professor Wordsworth spoke about the College and provided guests with a fascinating insight into the history and architecture of the Observatory. Pip Burley OW (1955-1962) introduced the WA Bursary Appeal, explaining that the Whitgift Foundation can no longer support bursaries to the same degree it has historically. If the strong tradition of bursary support introduced by the Founder is to be maintained, fundraising is now a necessity.

We were then joined by Jerry, one of the OWs currently studying at Oxford University, and the youngest of three Croydon brothers who were educated at Whitgift with bursary support. Without bursaries, Jerry’s family would have been unable to afford the fees. He explained how much it has meant to him and his family to be given this start in life with a great education. Jerry spoke very movingly and persuasively about the need to maintain bursary provision for boys who have been selected for the School on merit but cannot afford the fees.

Pip then undertook the auction in aid of the WA Bursary Appeal. Thanks to Nick Somers OW (1984-89) for donating the signed England football shirt and for Kate Bunn for successfully bidding. Thanks also to Richard Bates OW (1963-71) for his participation in the auction and for winning the bound book “John Whitgift”, donated by Dr Christopher Barnett. Many thanks also to Mr Andy Martin, Head of Football at Whitgift, for donating two other shirts for the Appeal.

The evening raised over £2,000 for the WA Bursary Appeal. Thank you to all who attended, purchased raffle tickets, participated in the auction and donated prizes and particularly to Professor Paul Wordsworth for sharing this remarkable venue and hosting a very convivial evening. Paul and Christine Wordsworth had days earlier become grandparents and with so much going on, we particularly appreciate them acting as hosts.

If you are interested in organising a regional dinner or fundraising event for the WA Bursary Appeal, please do get in touch. The WA Office is happy to help with arrangements. A lot of acquaintances are renewed as a result and it gives us the chance to raise money for the WA Bursary.