I have always been keen for adventure. My parents recall that from a young age I was obsessed with dressing up like Indiana Jones and running around the house using my belt as a lasso. Growing up, these obsessions became more extreme and were only accelerated during my time at Whitgift. I was fortunate to be able to go on lots of trips, from hiking the Atlas Mountains, to skiing in the Italian Alps. Coupled with my involvement in the CCF, I was set on joining the military, and living a life off the beaten track.

I have grown up during a time where we see the Middle East on the news every day, with yet another controversy occurring, often with a Western power involved. With its political dramas, wars which seem to be never ending, its breath-taking scenery, and beautiful, yet harsh terrain, the Middle East to me, a 21-year-old from South London, seems untouchable. It is for that reason that I wanted to travel there… as well as my burning desire to be like Lawrence of Arabia!

In May of 2018, I travelled to Israel in order to learn Krav Maga, and see some old friends. I happened to be present in Jerusalem when Donald Trump declared the American Embassy was to move from Tel Aviv to Jerusalem, and I witnessed Israel’s Independence Day, also known as Nakba Day (meaning Day of the Catastrophe) to the Palestinians. Needless to say, it was a turbulent and volatile time.

Within days of being home in June 2018, I was bored of London, so travelled to Scotland, to meet my good friend, and fellow Old Whit, Gideon. Whilst there, I had the idea to return to the Middle East.

In early February I flew to Tel Aviv, Israel, and then travelled to the south of the country by public bus. From the beach, with the Red Sea behind me, and Egypt to my west, Jordan to my east, I began walking north. The journey took over 60 days, covering over 1,000 km. I would typically walk anywhere from about 20 – 45 km per day, although that would depend on the terrain. Some days were completely flat, so walking a good few kilometres wouldn’t be an issue. Others may have seen me climb a mountain, or cross/avoid rivers or other obstacles. 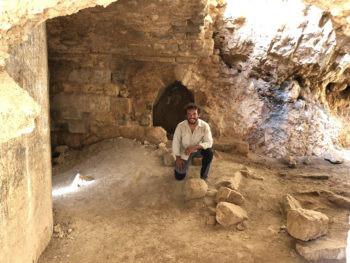 You begin to realise how precious the simple things are. Like light. Running out of light each day was a constant battle. I would be in a race against the sun, pushing to reach my day’s goal before the sun went down. Not just because it’s handy to have a bit of light when you’re walking through mountains, but more importantly, after dark is when the dodgy things start to come out, like wolves, hyenas, wild dogs, snakes, scorpions and Bedouins! Just to name a few.

The changing terrain was incredible, from the harsh mountainous desert of the south, where I had to pay a local guy to cache my water in holes he’d dug out of the rocky ground, and sending me GPS coordinates to find it. To the flat and mundane farm fields of the centre of the country. All the way to the green, sometimes wet, vibrant north, where I would often hike within a stone’s throw of various borders, with Lebanon, Syria and Jordan.

At one point I was attacked by a pack of wild dogs, as I unknowingly strolled into their territory. I was walking down a path with an overgrown forest on my left and a barbed wire fence line on my right. Two dogs appeared from the wood line to my left about 20 metres in front of me. I paused to debate whether or not to turn back. I decided I’d firm it, as there were only two of them, plus I’d encountered wild dogs and Bedouin dogs before along the trail, and so far had come out unscathed.

However, things were about to go south. Those two dogs became eight. Six dogs had appeared on the other side of the fence line, and by now were barking and growling viciously. By now, it was too late to turn back, but I was reassured since there was no chance those other six dogs could possibly get through/over the barbed wire fence that was separating us.

As I approached, the two dogs on the path in front of me became extremely aggressive, so I started picking up rocks and launching them at the ground in front of them. In a horrible turn of events, one by one the dogs that were inside that ‘impenetrable’ fence line, found a hole leading underneath it. I was now completely surrounded by wild dogs, with my back up against the fence, and the dark and gloomy forest in front. The only things I had to fend them off were my hiking poles, the rocks on the ground, and my voice. 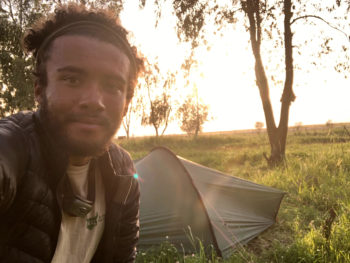 It took me the best part of half an hour to fight them off and get past the fence line. It was exhausting, and unrelenting. They were the ugliest and meanest looking dogs I’d ever seen in my life. Frothing from the mouth, scars and open wounds all over them. Terrifying.

I made it through, but not without injury. One dog managed to sink its teeth into the back of my hand as I reached for a rock. Thankfully, it only managed to get its top row of teeth in, as the rock in my palm had prevented it from sinking the bottom row in too. That night, I made it to a small Arabic village in the desert, which happened to have a clinic, where I was able to get my hand treated and rabies jabs injected.

I had Bedouins in the south try and steal my bag at night; sat and drank tea and coffee with some lovely Bedouins who also insisted I drank their goats’ milk (and I bloody hate dairy). I nearly fell into a pit full of dead and decaying animals, which I think would’ve been worse than the wild dogs!

I had to sleep in a bomb shelter inside a children’s nursery when Hamas were firing rockets into Israel as I happened to be walking by. When I awoke the following morning, we discovered some had landed within 100m of our position.

In Palestine, I visited Bethlehem and some of the neighbouring towns. I even managed to hitch a ride on the back of an IDF armoured vehicle, to cross a wide river, saving me the hassle of getting my boots wet. In the north I would go to sleep in my tent with the peaceful background noise of wolves, jackals and hyenas going mental, howling their hearts out.

I was charged by a wild boar, that appeared out of nowhere as I walked through some long, overgrown grass, but managed to escape by diving over a barbed wire fence. 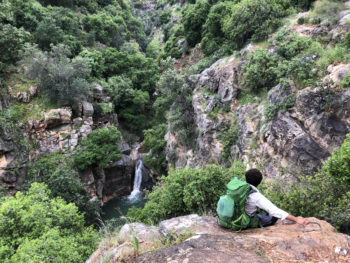 I was rescued from a mine field by a UN patrol vehicle, whilst hiking in the still contested and disputed, Golan Heights region, as due to the unusually heavy rain this year, the most the country has seen in 15 years, land mines have slid down hills and onto paths, as the ground turns muddy and loose. Unfortunately, two cows weren’t so lucky, as they were blown up a few days before, in the same field I was in. Oh and not to mention the risk of being caught in a flash flood. Which was high due to the unusual amount of rain. Particularly in the south, as I had no choice but to walk through many vast canyons, to avoid adding more distance to my day by going around. It sure has been an adventure.

Despite these events, a majority of the walk was somewhat boring and repetitive. The hardest part was having the discipline to wake up early every single morning, put on my stinking boots and socks so filthy they became stiff. My pants, which I’d alternate between two pairs, turning them inside out to wear the next day, giving the illusion I was wearing a ‘clean’ pair of pants. It also became more difficult after my encounter with the wild dogs in the desert, as I had become too paranoid to wear my earphones whilst walking, so that I could remain alert.

I miss the peacefulness and freedom of being isolated in vast wilderness. Relying on no one but yourself is an extremely fulfilling feeling, particularly when you’re in hairy situations. It almost becomes addictive. Since my return, I haven’t had to make any life changing decisions, where being right or wrong can have some heavy consequences and I feel as though I’ve lost my sense of purpose. Whilst I was over there, each day brought a mission to complete, a goal to reach. Since being back, the normality of everyday life is insanely boring.

Since returning a month ago, I have taken part in an international NATO patrolling exercise in the Italian and Swiss Alps with the Officer Training Corp (OTC). Lasting five days, conducting a shooting competition, then a 48 hour 4-man patrol, navigating through the mountains and towns, conducting tasks along the way. Next I will go to Okehampton for a 3-week training camp, then in August cross Corsica on foot with a few of the guys from the OTC. As long as I keep busy and am not stuck indoors for too long, I manage to stay sane.

I intend to make a career in the military but will have to make time to walk the length of Jordan, so that I can finally have my Indiana Jones moment of reaching the ancient city of Petra. That’s very high on my “To Do” list!