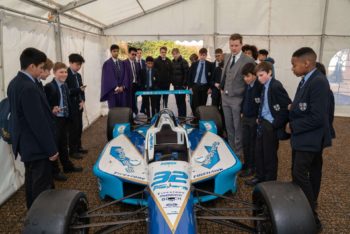 A Whitgift student in 1962 with ‘no idea what I wanted to do with my life’, he explained to current students how his first job out of school developing computers became a passion and with hard work and determination he was able to work his way up to being a venture capitalist at Silicon Valley.

Kevin reflected on the process of prepping the winning car and wanted to leave the students with the message that racing is a series of ups and downs. “You must try and learn to fail in order to succeed.”

Kevin displayed his two race cars at Whitgift for the day and kindly allowed the pupils to sit in them and take photographs while he answered their questions about careers in Engineering.

The retired CEO, who owns the Long Beach Grand Prix Association, Cosworth Racing and Cosworth Electronics, kindly donated his Indy 500 trophy to the Headmaster which will be showcased proudly in the School’s Design Technology Department.