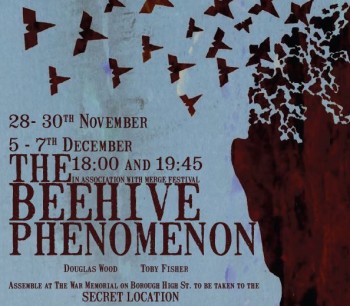 Doug Wood OW (2009-2014) has written a new piece of theatre entitled “The Beehive Phenomenon”, which will be staged at a secret location in Borough from 28th November. The entire production is put together and performed by Whitgiftians, namely Doug Wood, Toby Fisher, Liam Fernandes, Raj Sukul, Henry Parrit and Charles Sladdin.

“Absurd and unsettling this is something not to miss! Be led to a secret location transformed into a desert war-zone, and discover the forgotten stories of The Great War’s African Front; the front where “nothing was achieved, nothing was gained.” Following the lives of two British soldiers, the performance integrates installation, animation, and music to explore the themes of companionship, freedom, and the madness of war. Inspired by reports and the recollections of local residents, The Beehive Phenomenon asks how men can fight a war when they can’t even find their allies let alone enemies? How can they push when they don’t know what they are fighting for anymore?”

The Beehive Phenomenon – Trailer from The Innocents on Vimeo.